At the end of every year I like to look back at some of the work that I’ve done over the previous 12 months to see things that I did right and things I need to work on in the year to come.  I picked out a few photos from this past year that, for one reason or another, I liked and wanted to share.  Here we go!…

I photographed Giuseppe Lucarelli, a WVU College of Business and Economics EMBA graduate, for B&E’s Fall/Winter 2016 magazine.  Lucarelli is the founder of Mountain Wind Productions, a film production company based in Pittsburgh, PA. I made this photograph at an old jail in Ambridge, PA at one of the locations for his upcoming film, “Bystander.”  I talked a couple crew members into standing in the background and used 2 strobes to light the scene.  The main light is an Alien Bee B800 in a medium soft box camera right and the accent light is a vivitar 285 flash placed in the jail cell to the left. (J. Alex Wilson – WVU College of Business and Economics)

Anna McCarty Carrier is a WVU College of Business and Economics graduate and co-owner of The Cupcakerie, Morgantown’s first and only cupcake bakery.   I photographed her in their downtown Morgantown shop for the WVU College of B&E’s Fall/Winter 2016 magazine.  I used two lights in this shot.  The main light is an Alien Bee B800 in a medium soft box camera right.  There is accent light, an Alien Bee B800, with a spot grid to back and left of Anna to give some separation between her and the background.  (J. Alex Wilson – WVU College of Business and Economics) 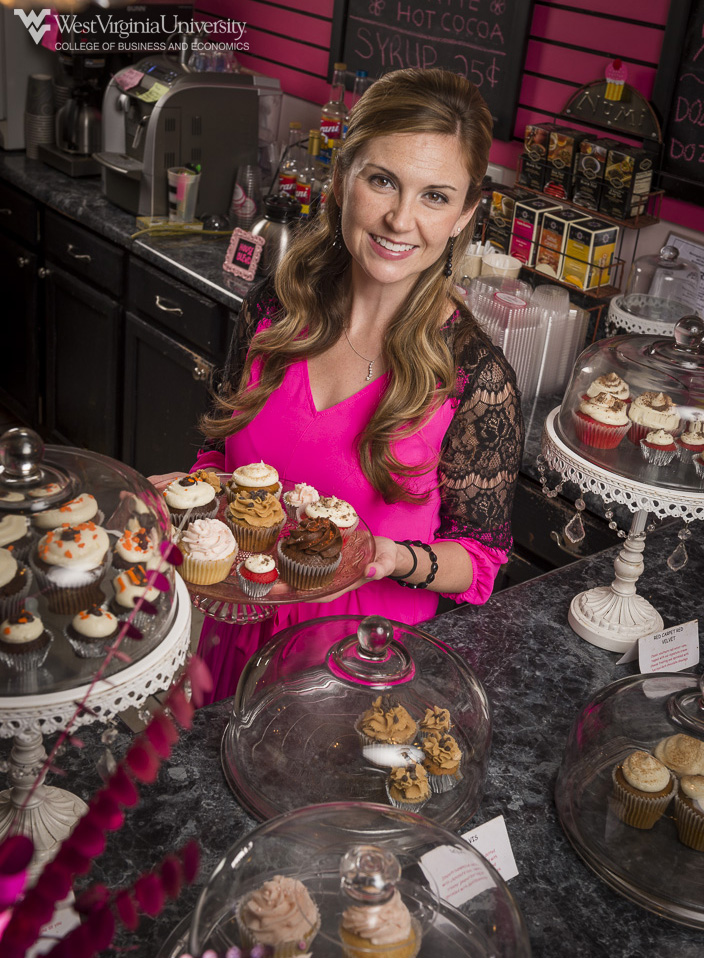 I photographed A. Stephen Stout with his father Steve Stout for the WVU College of B&E’s Fall/Winter 2016 magazine.  Stephen is a 2013 accounting graduate and runs Young & Stout, a 3rd generation family owned business.  Young & Stout is a USDA meat processor and premium wholesale meats and cheeses distributor operating in North Central West Virginia.   I used 3 strobes in this portrait.  The main light is an Alien Bee B800 in a medium softbox, slightly camera right, and there are two Vivitar 285 flashes behind the subjects at 45 degree angles as rim lights.  The 2 rim lights are feathered slightly toward the background to add a little light on the meat hanging behind them.   (J. Alex Wilson – WVU College of Business and Economics)

Rebecca Wendt is a senior finance major in the WVU College of Business and Economics and a member of the WVU Cross Country team.  I did this shoot in the WVU Coliseum and used a similar light setup in both shots but with different results.  In both of these photos the main light is an Alien Bee B800 in a medium softbox, camera right.  There is also a Vivitar 285 flash behind Rebecca in both photos but in the first image the light is facing her back and in the second the flash is turned away from her toward the wall.  (J. Alex Wilson – WVU College of Business and Economics)

Clayton Peachey, an MSIR student at the WVU College of Business and Economics, is a Strategic Communications Office Intern at NASA’s IV&V Facility in Fairmont, WV. In the first photo there are two lights.  I used an Alien Bee B800 in a 43″ Soft Lighter, camera left, as an overall fill light.  The white balance in my camera (a Nikon D610) was set to tungsten and the fill light was unfiltered giving the photo an overall blueish (daylight) cast.   The main light was an Alien Bee B800 with a grid spot placed camera right and aimed at his face.  The spot light was gelled with an amber filter to balance the light with the camera’s tungsten white balance setting.  In the second photo, there is only one Alien Bee B800, camera right as a main light.  The shot was taken outside the building and the white balance in the camera was still set to a tungsten.  The main light was gelled with an amber gel to balance the light with the camera.  (J. Alex Wilson – WVU College of Business and Economics) 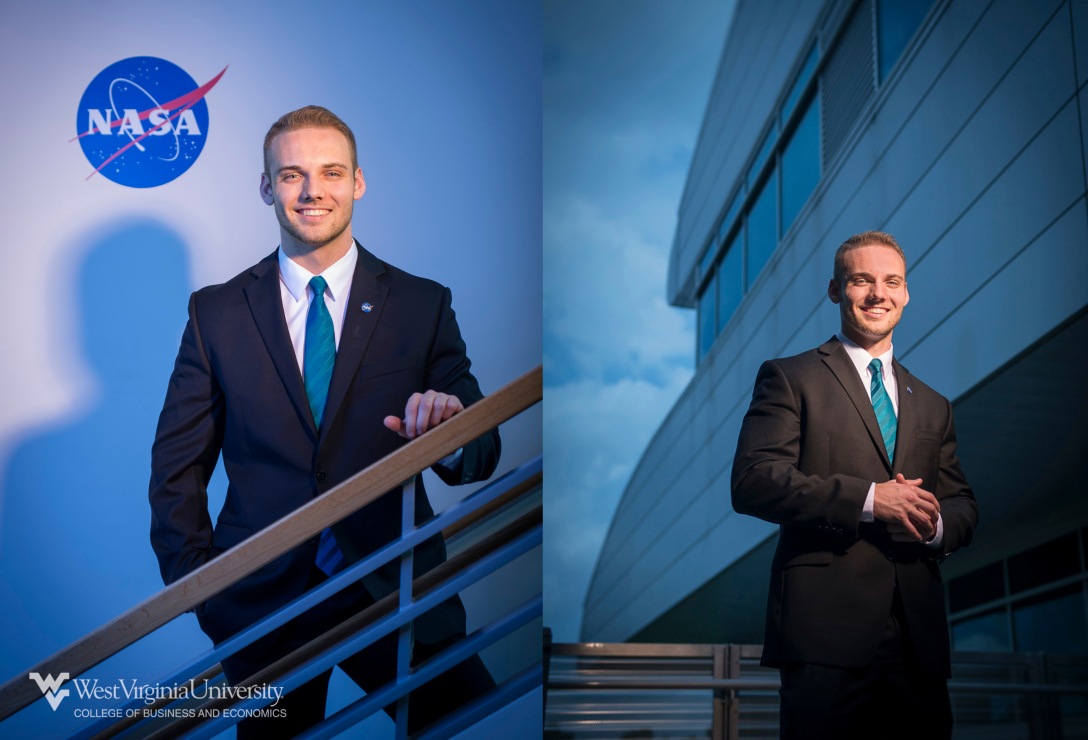 Garrett Spurgeon, senior accounting major from Canton, Missouri  is the captain of the WVU Rifle team. In his four years on the team, they have won four consecutive NCAA Championships.  I Photographed Spurgeon at the WVU rifle range. This is a two light setup.  The main light is an Alien Bee B800 in a medium softbox camera right, set up  almost directly in front of his face. Another Alien Bee B800 is placed behind him and aimed at his back.   (J. Alex Wilson – WVU College of Business and Economics) 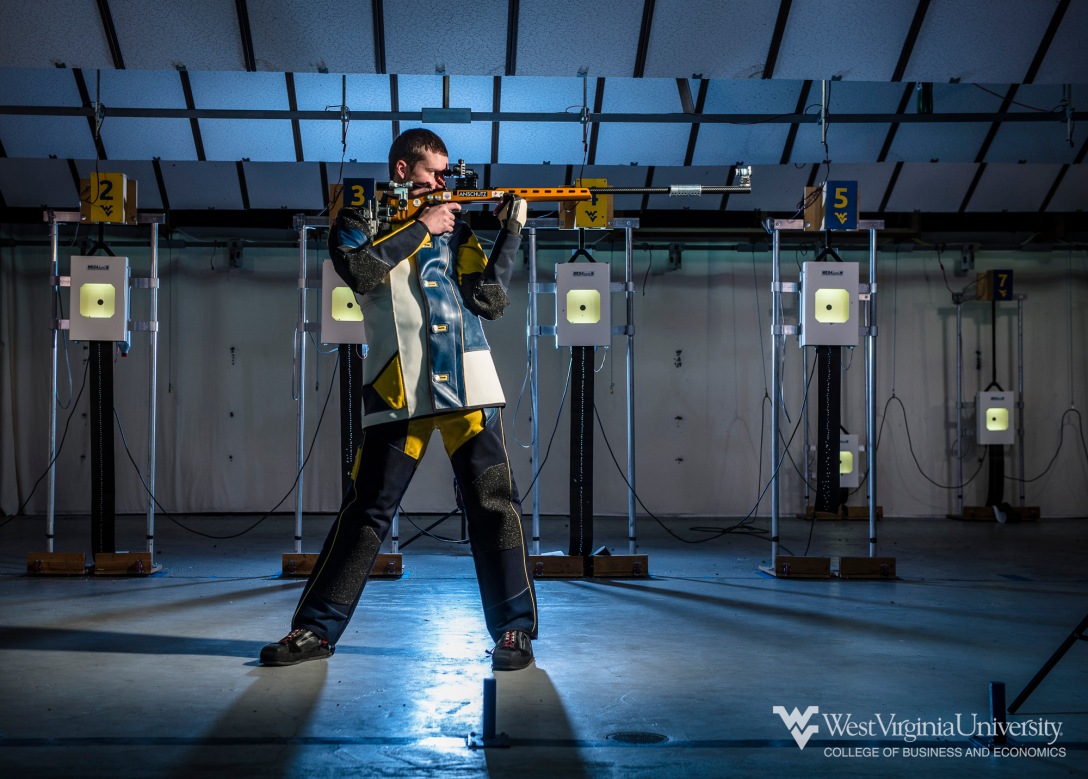 WVU College of Business and Economics alumnus Russell Bunio, a supply chain management expert, was formerly Vice President Supply Management and Procurement at The Boeing Company and Vice President and Chief Procurement Officer at Cummins Engine Co.  Bunio is photographed at Tampa International Airport in Tampa, Fl in front of a Boeing jet.  There is one light used in this portrait, an Alien Bee B1600 in a 43″ Soft Lighter, camera right. The main light was about a stop brighter then the ambient light.  I was able to cut down on the ambient light using Lee Neutral Density filters in front of the camera lens. (J. Alex Wilson – WVU College of Business and Economics)

This photo was from a shoot that was one of the biggest treats of the year for me.  The WVHEPC’s Chancellor’s STEM Speaker Series brought in Joel Sartore to speak at the Clay Center in Charleston, WV.  Sartore is a photographer, speaker, author, teacher, and contributor to National Geographic magazine.  He is the creator of the Photo Ark, a project that seeks to document every animal species in captivity.  Partnering with zoos around the world and the National Geographic Society, he plans to photograph as many as 12,000 animal species and is currently over half way to his goal.  I photographed Sartore while he was shooting a collection of West Virginia’s native Crayfish brought by students from West Liberty University.  He brought a portable studio with him and the shoot was held in his room at the Embassy Suites Hotel in downtown Charleston. 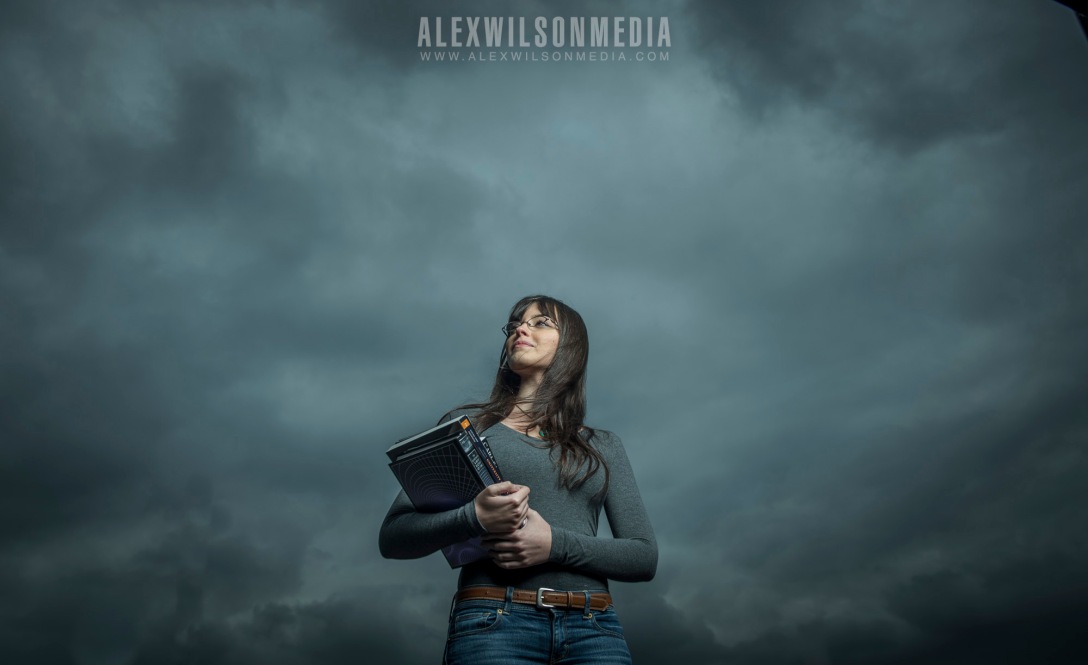 Nadja Spitzer, Ph.D., assistant professor of biological sciences in the College of Science at Marshall University, is Marshall’s 1st recipient of the National Science Foundation’s CAREER award.  She earned the award for her work to study how exposure to silver nanoparticles could be affecting the brains of children and adults.  I made these photos using only the existing light in her lab. 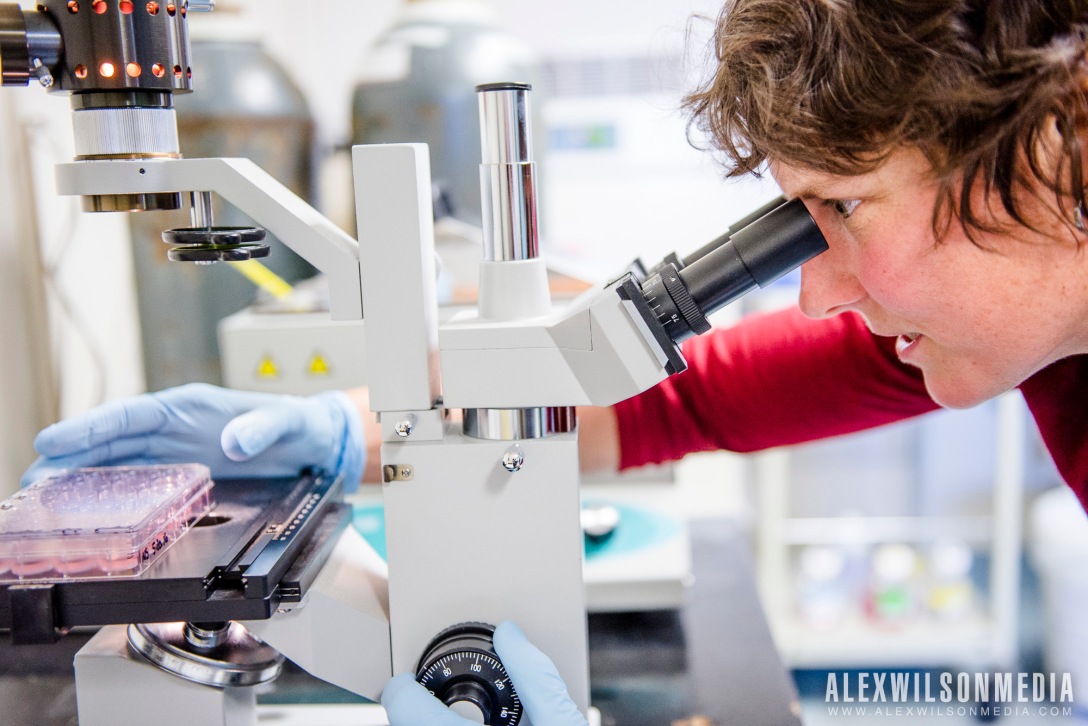 Last year I finally bought a beauty dish to play around with.  These two photos where just some experiments with that dish.  They both are two light setups.  The beauty dish, attached to an Alien Bee B800 is on a boom stand and there is another Alien Bee B800 with a spot grid behind the models facing the backdrop.  In the second photo there is a magenta gel over the light.

This fall, I traveled throughout the state photographing the fall color.  Some places I’ve been to numerous times and some places it was my first visit.  The fall color wasn’t as spectacular as in past years but I didn’t let that bother me at all.  Its all about capturing the best light and drama of the scene.

Sunrise at the Bear Rocks Reserve area at Dolly Sods. 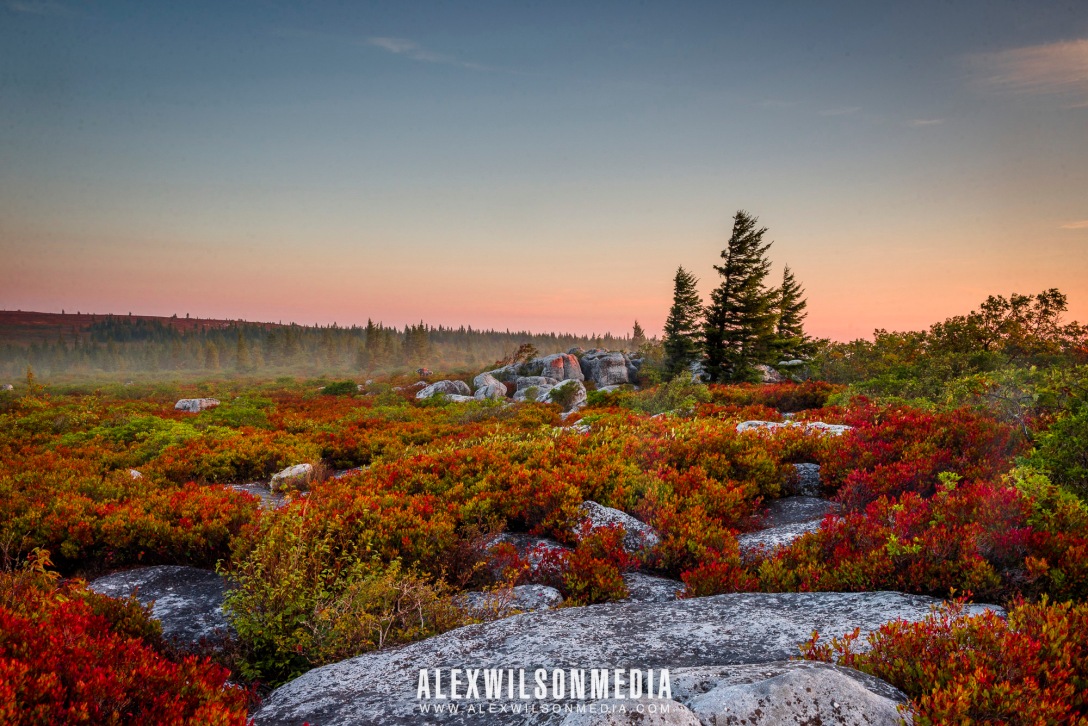 Sunrise at the Bear Rock Preserve in Dolly Sods. 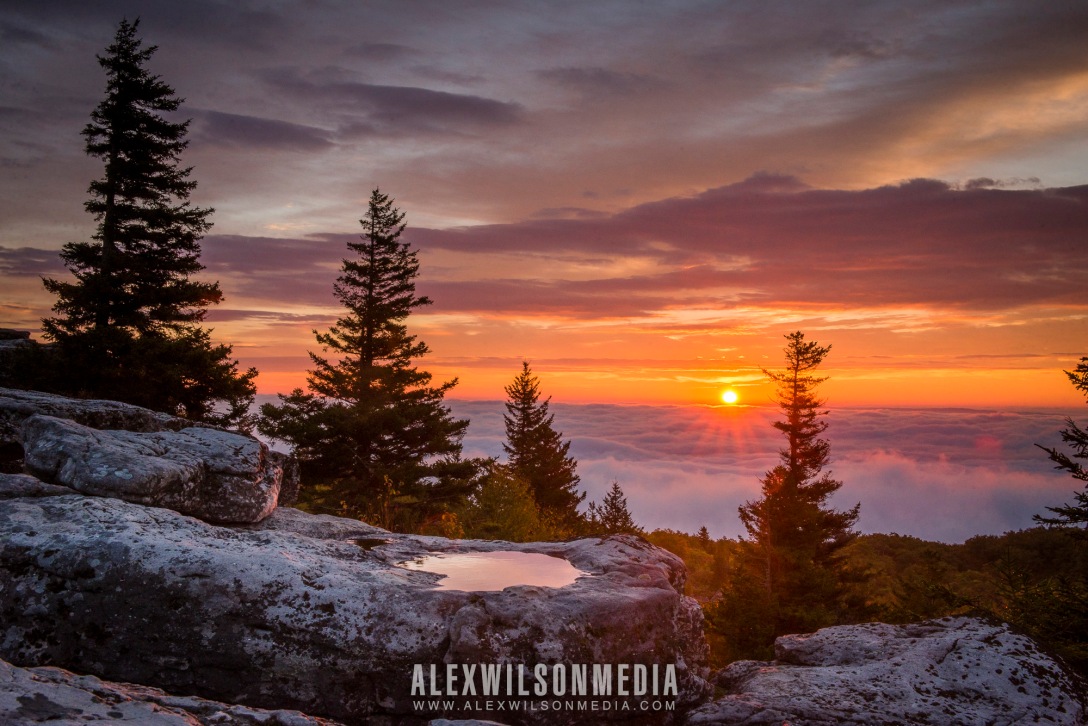 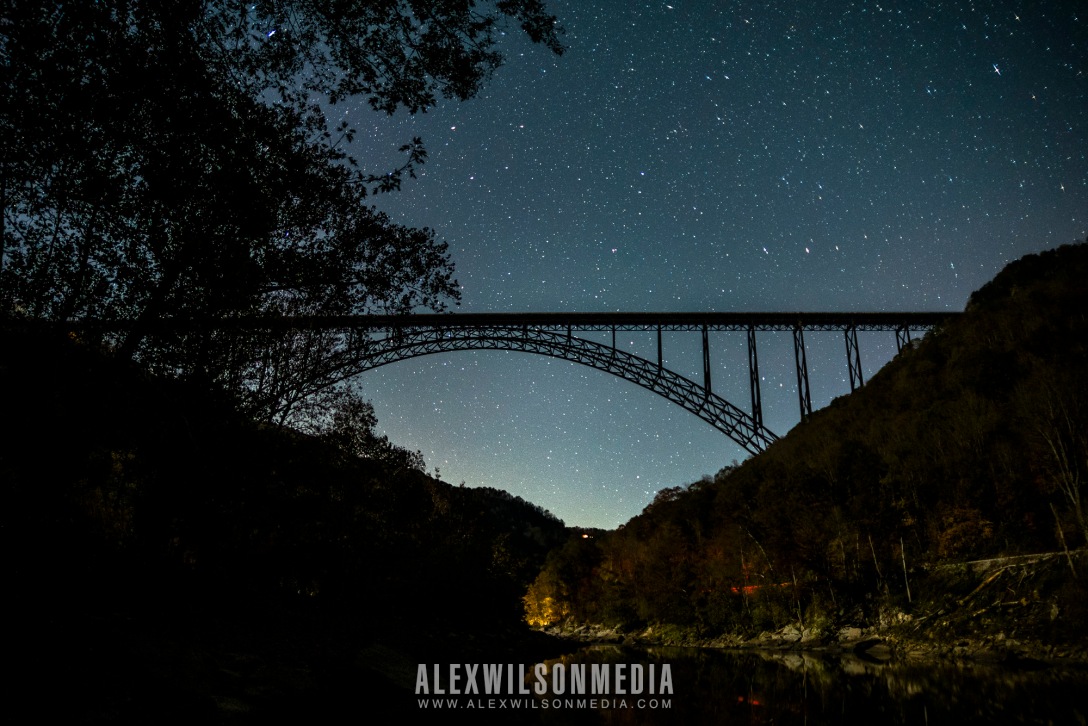 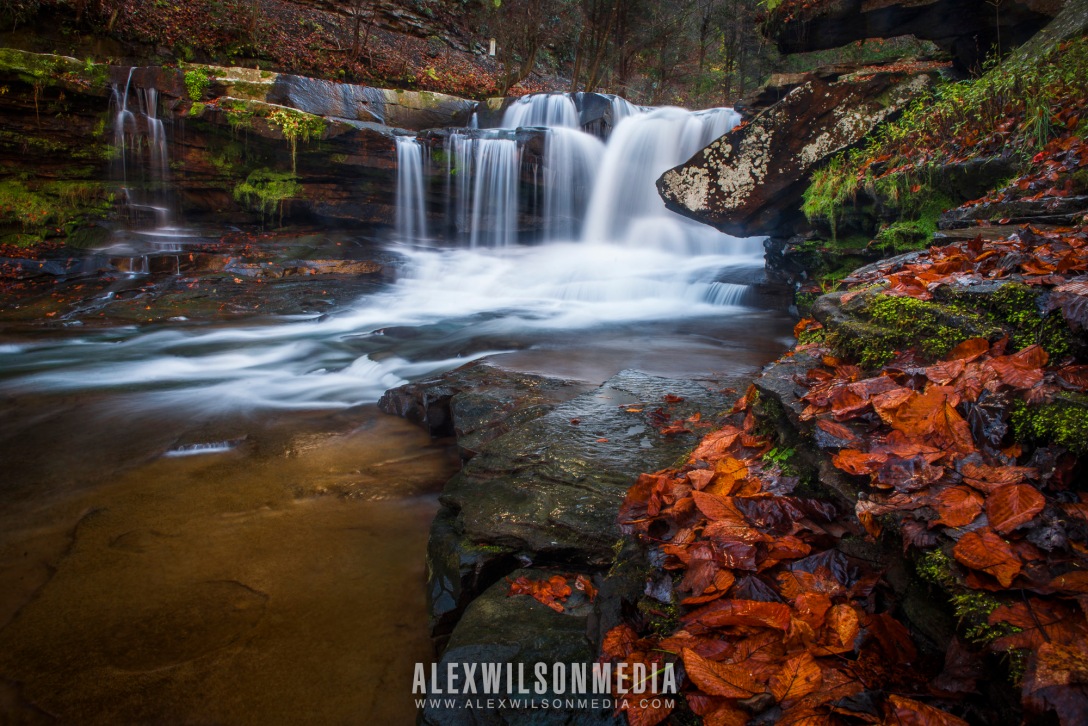 Pillow Rock Rapid on the Upper Gauley River is one of my favorite places in the state to shoot white water.  Its a difficult spot to get to if you aren’t boating in.  You start at Carnifex Ferry Battlefield State Park near Summersville, WV and hike several hundred feet down a very steep “path” into Gauley River Canyon.  These Class V rapids are some of the best on the Gauley.

This shot was taken back in the Spring at Coopers Rock State Forest.  In May of this year the 17-year Cicadas were everywhere in northern WV.  It was so impressive (and loud) that I just had to throw one picture of these guys in here. 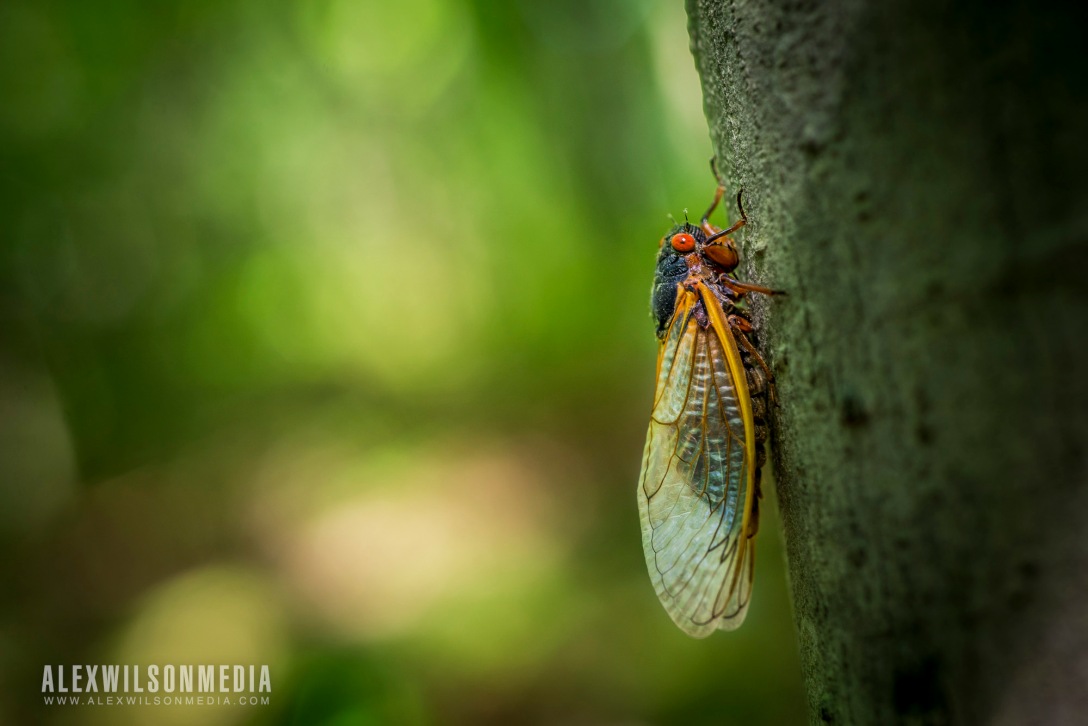 I spent a lot of time in Pittsburgh this summer exploring, eating and photographing.  I spent most of the time there producing a short time lapse video called “Exploring Pittsburgh.”

Fourth of July fireworks in Pittsburgh, PA. as seen from Mt. Washington.

Downtown Pittsburgh, PA as seen from an overpass along I-279 north of downtown.

Pittsburgh Pirates  vs. the LA Dodgers at PNC Park in Pittsburgh, PA.

I visited NYC for a couple days last March to see Billy Joel in Concert at Madison Square Garden.  It was a gloomy couple days but it let up enough to go out and walk around the city.

The Brooklyn Bridge, Looking towards Manhattan in New York City.

The Manhattan Bridge framed by buildings in the DUMBO area of NYC. (J. Alex Wilson) 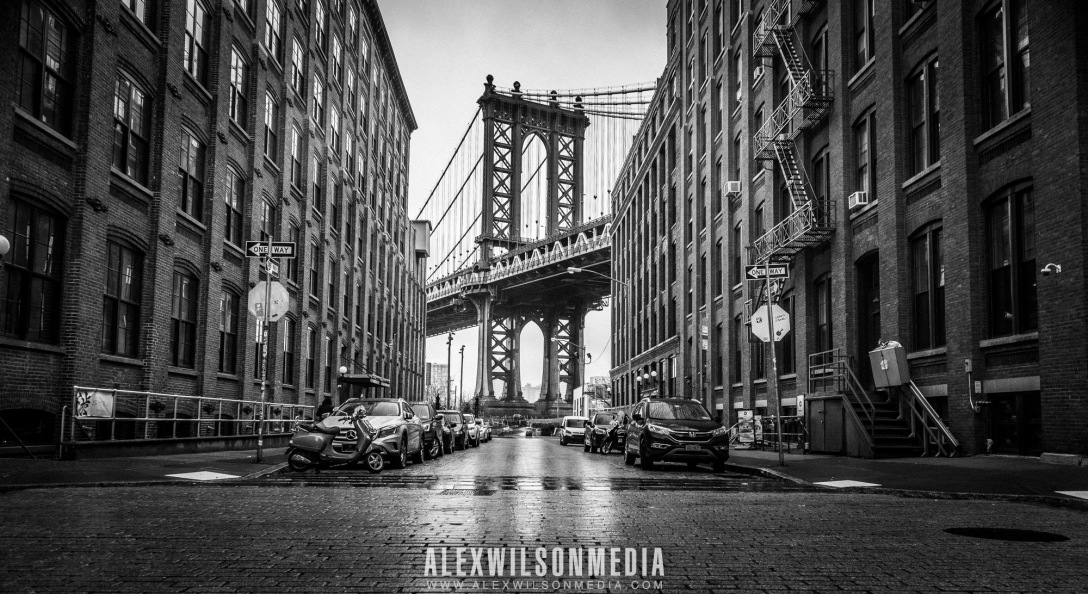 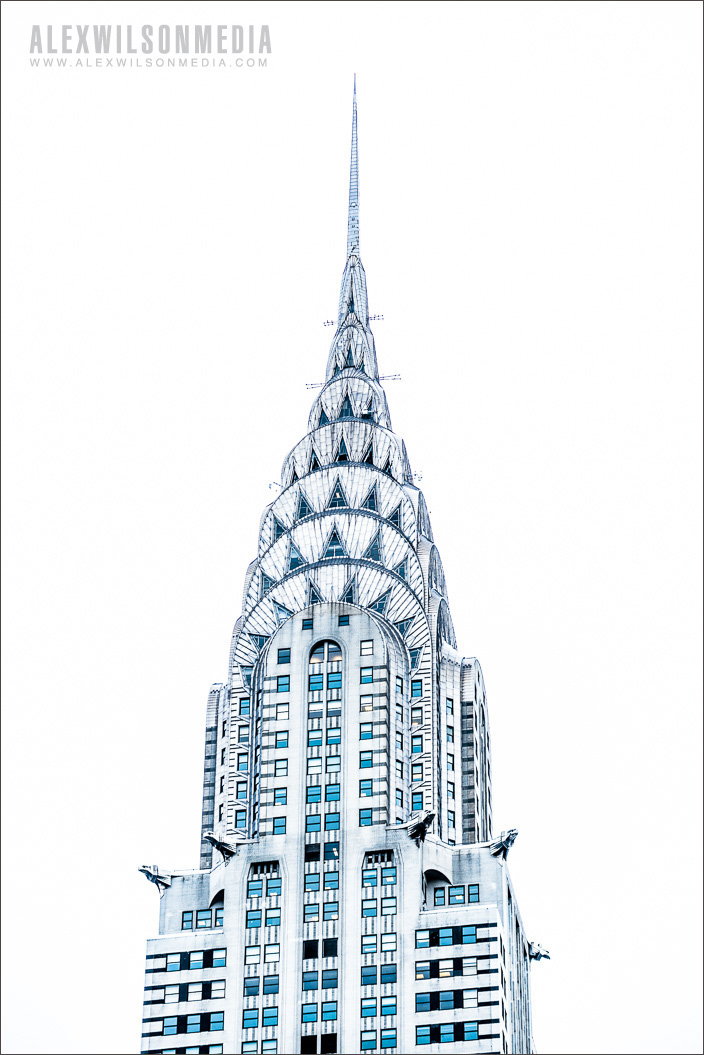 In my job with the WVU College of Business and Economics I photograph A LOT of students and student events.  Out of the hundreds and hundreds of these photos I just thought I would grab a few that I thought were successful. 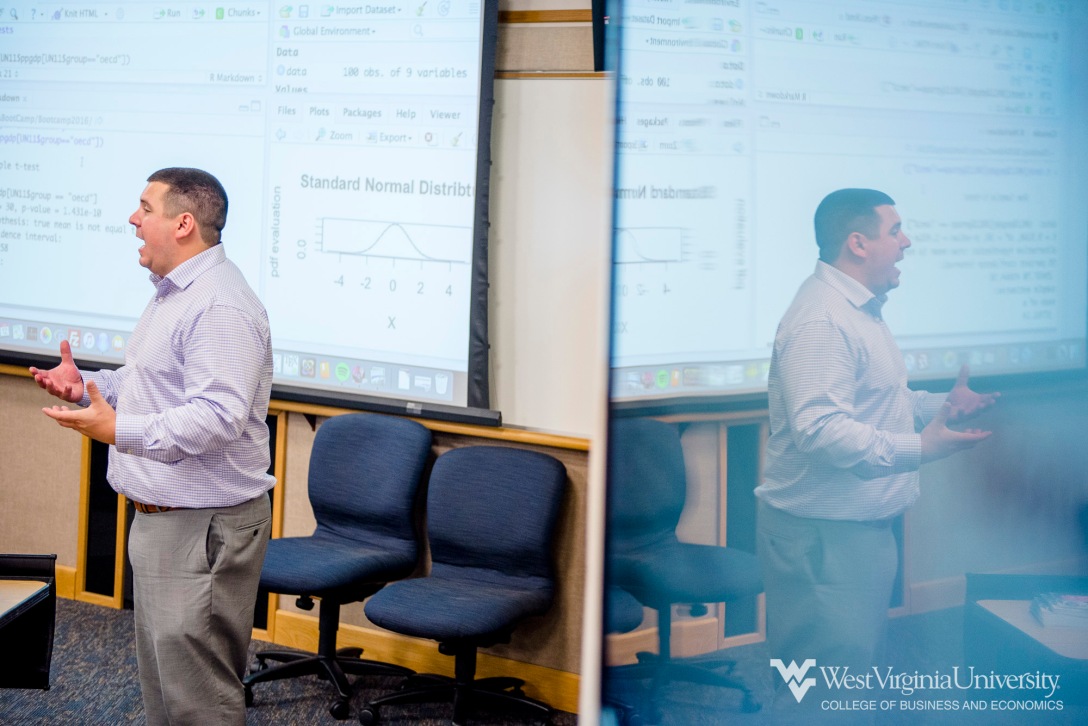 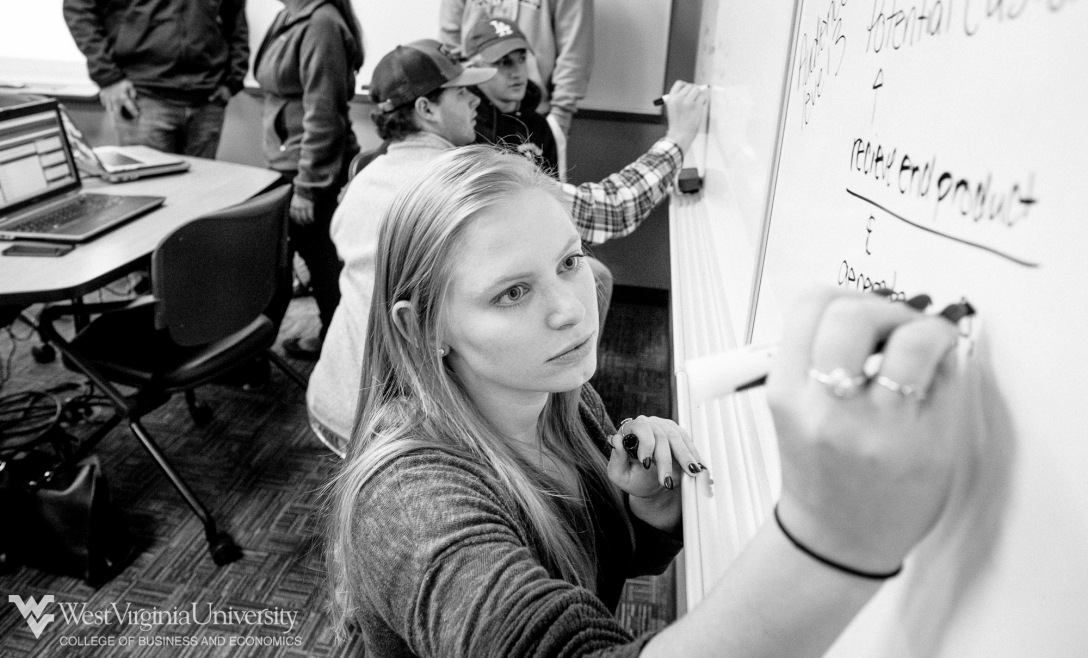